The Key to Integrity 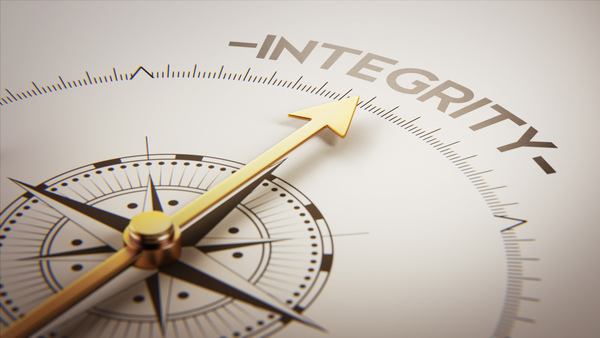 The book of Job has been a source of comfort and strength down through the ages, and the example of Job’s perseverance in the face of great adversity and suffering continues to inspire. Early in the story, after losing his fortune and all his children, Satan afflicts his body with “loathsome sores from the sole of his feet to the crown of his head.” (Job 2:7) Sitting on an ash heap he begins to scrape the oozing pus from his body with a piece of broken pottery.

At this point, Job’s wife speaks for the first time saying, “Do you still hold fast your integrity? Curse God and die!” (Job 2:9) In her mind there appeared to be a direct link between sin and punishment; in other words, she believed Job’s suffering was evidence that he had done something to deserve it, and that holding onto his integrity now was just a charade. Advising her husband to “curse God” was tantamount to saying, “Go ahead, get it over with, kill yourself.” We really can’t be too hard on Mrs. Job, for she had lost children and wealth as well. What I want to point out is that Job did, in fact, hold fast to his integrity despite the incredible pain and suffering he was called to bear.

Job had zero knowledge of the cosmic contest going on behind the scenes, and that Satan was banking on him cursing God to his face. Eventually, even Job’s friends accused him of hypocrisy and questioned his integrity. Yet, towards the end of the book Job declares his steadfast faith saying, “till I die I will not put away my integrity from me. I hold fast my righteousness and will not let it go.” (Job 27:5b-6) What a tremendous example he is to us.

In difficult times it is easy to question God, even blame him, and use those adverse circumstances as an opportunity to indulge the flesh. Just as in Job’s case, God allows trials for our good and His glory, while the devil uses them to exploit our weaknesses. Remember, it’s during life’s storms that we’re tempted to give in to anger and bitterness toward God.

The key for Job was that he lived rightly before the storm came. He was already a man of faith and integrity, and the trial only served to reveal it. He was also concerned about his family, continually offering sacrifices on their behalf. He was the same person outside his home that he was inside his home. If we’re going to maintain integrity throughout the storms of life, we must be men of integrity today.

The example of Billy Graham comes to mind. The Lord used him to reach millions with the gospel of Jesus Christ. In over 50 years of ministry, over 400 crusades, preaching to over 84 million people face to face, and 200 more million by satellite feed, he kept his reputation and character above reproach.

Once, while speaking to a crowd of 4,000 Christian leaders about integrity Dr. Graham confessed, “The thing I fear more than anything else in the world is that I may make a mistake and bring disrepute on the gospel, and my power be taken away and I become a castaway. Rather than anything else on my tombstone, I would want to have inscribed the testimony from Psalms, “I have walked in my integrity.” (Psalm 26:1) May that be the desire of our hearts.