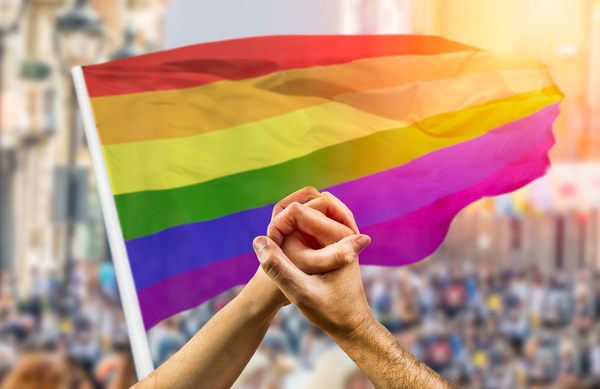 "They are headed for destruction. Their god is their appetite, they brag about shameful things, and they think only about this life here on earth." (Philippians 3:19 NLT)

It began in 2000 when President Bill Clinton officially proclaimed the month of June as “Gay and Lesbian Pride Month.” Ironically, this was only four years after he had signed the Defense of Marriage Act into law. In 2011, it was expanded under the Obama administration to include bisexuals and transgender individuals. This year, under President Biden, June has become LGBTQIA+ Pride Month. Celebrations will include marches, parties, concerts, workshops, and symposia, bringing people from around the world to participate.

There is not space here to trace the development of the moral revolution we have witnessed in the United States in the last 20 years, nor is it my intention to explain how we have arrived at a place in our history where so many forms of sexual sin have been normalized. Suffice it to say there was a strategic set of dominoes that had to fall before the Supreme Court legalized homosexual marriage in 2015. My purpose in this blog is to encourage Christian men to remain true to the biblical doctrine of sexuality. How can we do that?

1. Know what the Bible teaches about sexuality.

There is simply no honest way to interpret Scripture to excuse sexual sin, including homosexuality, adultery, or any form of fornication. Sound biblical interpretation reveals any sexual activity outside the bounds of biblical marriage is a sin in the eyes of God. If you feel you need help in understanding the biblical approach to sex, here are a few books I recommend:

• What Does the Bible Really Teach About Homosexuality by Kevin DeYoung

• The Secular Creed by Rebecca McLaughlin

• Is God anti-Gay? by Sam Allberry

• God and the Transgender Debate by Andrew T. Walker

• The Meaning of Marriage by Timothy and Kathy Keller, and

• for an understanding of how the moral revolution developed, Al Mohler’s We Cannot Be Silent is excellent.

These are just a few books that will inform and equip you to meet the various challenges related to sexuality facing Christians today. For teens, I recommend McLaughlin’s 10 Questions Every Teen Should Ask (and Answer) about Christianity.

A great deal of effort has been given to intimidate and silence those who stand for biblical morality. We are said to be on the wrong side of history. Christians who believe any deviation from God’s creative purpose for sex and are labeled haters, while secular media portrays homosexuals in the most complimentary fashion.

Another form of opposition comes from those claiming to be Christian. Bowing to cultural pressure, liberal and progressive Christians insist on a complete reinterpretation of the Bible. In We Cannot Be Silent, Al Mohler states, “The normalization of same-sex relationships and behaviors could not have happened without a significant group of liberal Bible scholars, theologians, and religious leaders who were willing to declare that the church’s position on the sinfulness of homosexuality—a position that had existed for millennia—was in error and needed a major overhaul.”

At this point, it's helpful to remember two things: first, unopposed beliefs are easy to hold; faith is validated in the face of opposition (see James 1:2-3). Indeed, the Bible tells us to expect opposition and to persevere in the face of it. Moreover, in Acts 5, the apostles go beyond perseverance when they rejoiced after being flogged and silenced by the high council, because "God had counted them worthy to suffer disgrace for the name of Jesus." (Acts 5:41)

Second, Jesus says that everything in Scripture points to him (see Luke 24)—which includes its teachings on gender, marriage, and sex. Therefore, denying biblical teaching is tantamount to denying Christ, and we are warned: "whoever denies me before men, I also will deny before my Father who is in heaven." (Matthew 10:33)

Disagreement is not hatred, no matter how much the moral revolution tries to make it so. Those dedicated to the moral revolution would perceive the verse I cited at the beginning as hateful and bigoted. Their clamor against biblical Christianity betrays an underlying sense of guilt which cannot be drowned out by all their shouting and dissent. Many of them wake up every day to the voice of conscience reminding them their acts are sinful.

The only answer to human guilt and shame is the gospel of Jesus Christ. Therefore, let us boldly and lovingly share the truth with those caught in the grip of sexual immorality. You are not responsible for the reaction of your detractors. Love them despite all their anger and arguments. Love them because Christ loves them and died to rescue them from their sin.

This month is really a month of shame for a country that celebrates and encourages the perversion of God’s created order. You may very well have opportunity to speak the truth in love. Don’t surrender to cultural pressure and remain silent should you be confronted on these issues. Pray God will use you to speak his truth into the lives of those weighed down by the guilt of their sin.

There is no pride in the celebration of sin