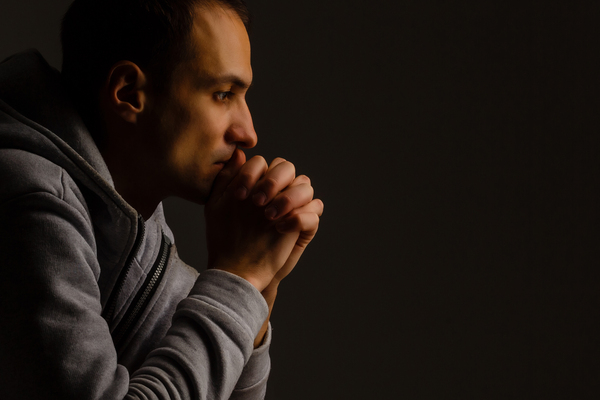 One of the great battlegrounds in a man’s life is his thought life. It’s one of those common areas in which all of us struggle. Living in a secular age, with its selfishness and salaciousness, makes the challenge even greater. And it’s wrong to suppose that thoughts are not sinful and it’s okay to entertain immoral notions, as long as you don’t act on them. In his Sermon on the Mount, Jesus made it clear that a man can sin in his heart.

Let’s face it, a man may sin in his mind anytime, anywhere, and under any circumstances. He may abstain from sinful actions while engaging evil fantasies. A man may sit in church while his mind is in the gutter. He may serve outwardly even as he sins inwardly, and he is as guilty before God as if he had acted it out.

A man may sit in church while his mind is in the gutter. He may serve outwardly even as he sins inwardly

What can a man do to keep his thoughts out of the gutter? How do we follow Paul’s advice in Philippians 4:8 to think on things that are true, honorable, right, pure, lovely, and admirable?

A man is not going to change his thought life unless he realizes the danger it poses. We first need to accept the fact that evil thoughts lay the groundwork for evil acts. Ralph Waldo Emerson once said, “Sow a thought, reap an act. Sow an act, reap a habit. Sow a habit, reap a character. Sow a character, reap a destiny.” All sin is first incubated in the mind. Jesus taught that sin proceeds out of our hearts (see Matthew 23:25-28).

2. Understand how the mind sins.

God’s Word repeatedly condemns wrong thoughts, such as pride, covetousness, and discontent. And there are three ways we can sin with our minds:

Recalling. Satan loves to bring up things from your past, hoping you’ll indulge those evil thoughts. He does this to drag you back into those things. This is one of the dangers of pornography. But it’s not just immoral sexual thoughts that must be resisted. It’s also relishing thoughts of vengeance, cheating, and lying which proved satisfying at the time.

Scheming. We also sin by devising a way to get even with someone who wronged us. One of the things on God’s “hate list” in Proverbs 6 is “a heart that devises wicked schemes.” Have you ever thought about what you’d like to do or say to that co-worker or neighbor that did something that really upset you? The Bible says, “The LORD approves of those who are good, but he condemns those who plan wickedness.” (Proverbs 12:2)

Imagining. A guy might say he has no desire to act on his sinful thoughts, he just enjoys them. They’re like candy for the mind. Most men who long to flesh out their fantasies only refrain from acting on them for the sake of their reputation. It doesn’t have to be something heinous. It could be thinking about being married to someone else, how to cheat on your taxes, or giving your mother-in-law a piece of your mind. Are such things really sinful? God’s Word says, “The devising of foolishness is sin.” (Proverbs 24:9)

Confess your sinful thought to God. This is the first step. Do this as often as you need to. Refuse to allow your thought life to become a barrier between you and the Lord. Charles Spurgeon once paused in the middle of a busy street in London. One of his members noticed him stopping and asked what he was doing. He said, “For a brief moment, a cloud came between me and Christ. I didn’t want to wait till I crossed over to dispel it.”

“O Jerusalem, wash your heart from evil, that you may be saved. How long shall your wicked thoughts lodge within you?” (Jeremiah 4:14)

Avoid sinful attractions. The world constantly offers up a smorgasbord of sensuality. As Christians, Paul’s instructions in Philippians 4:8 implies that we are responsible to monitor our mental input. The Psalmist said, “I will set no vile thing before my eyes.” (Psalm 101:3) If at any moment you feel the Holy Spirit convicting you, reminding you, warning you, then do whatever you must to avoid that show, that site, or even that person.

Feed on God’s Word. It is never enough to simply remove sinful thoughts; they must be replaced. The best way to do that is feeding on God’s Word. Spending time daily in the Scripture is your best defense against those “fiery darts of the wicked.” Memorizing Scripture will further your ability to “destroy arguments and every lofty opinion raised against the knowledge of God and take every thought captive to obey Christ.” (2 Corinthians 10:5)

Some may think these things are so well acknowledged by most Christian men that they hardly need mentioning. If that’s the case, all I can say is that I personally needed the reminder. And if I needed it, maybe you did too.

Familiar truths on private sins, think on these things.