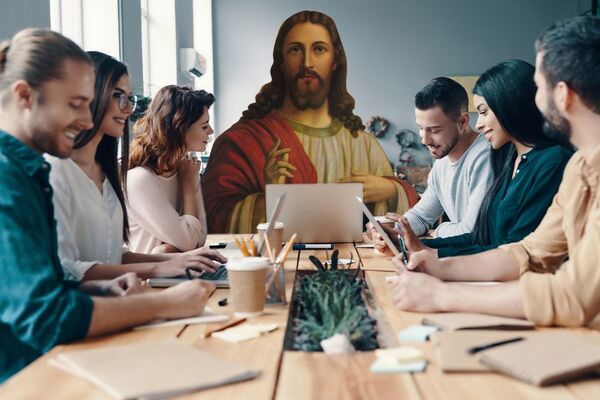 You may or may not have seen the ads that bill Jesus as “getting us.” The “HeGetsUs” campaign, rolled out by Haven, a Michigan-based marketing agency, seeks to attract skeptics and cultural Christians by showing how relevant Jesus is to their lives. With a $100 million price tag, it’s the largest Christian advertising campaign in history. The videos have already been viewed by millions on TV and millions more via YouTube. Viewers can engage with the website, HeGetsUs.com, by live chat, requesting prayer, signing up for a group, or clicking for a Bible-reading plan on the YouVersion app.

Predictably, the responses to the campaign have been mixed from extremely positive to extremely negative. As for the negative, Christianity Today reports that some Christians have a problem with treating Jesus as a commodity, and that the campaign risks non-believers only seeing him that way. One Christian YouTuber called the ad campaign false teaching.

Atheist Hemant Mehta interprets the ads as saying, “See? Jesus is just like you. He understands you. He’s been there. Now worship Him or else you’ll burn in Hell for all eternity. Very catchy stuff.” To him the most obvious flaw in the campaign is that “most of the people using the product aren’t worth admiring.”

On the positive side, the campaign seeks to start conversations about Jesus, to open doors for people to meet him through authentic disciples. Fueling the movement is the belief that people are looking to heal broken relationships, deal with life’s challenges, and find meaning and purpose for their lives. “HeGetsUs” attempts to convince non-believers that churches can be safe places where they will be loved and accepted just as they are.

So, rather than reacting critically to the campaign, I think we should adopt the attitude of the Apostle Paul who reported to believers in Philippi that even though some were preaching Christ with impure motives, he rejoiced that “whether in pretense or in truth, Christ was being proclaimed.” (Philippians 1:18) Let’s be grateful for any and every attempt to bring about interest in Jesus and the gospel.

But to turn the idea around, it’s my belief that it’s far more important to “get Jesus” than for him to “get you.” For that reason it’s important that we know how to present him to others as he is revealed in Scripture. In this post-Christian world most people are ignorant of the real Jesus and see Christianity as a religion of judgment and hypocrisy.

As ambassadors for Christ it’s our job to help people "get Jesus"--in other words, to understand what he’s done for them, how he loves them, and how they can find grace and forgiveness in him. Each time you see one of these “HeGetsUs” ads, remember that people will find Christianity much more appealing if we, by life and lip, show them who Jesus really is.

Jesus isn’t some religious commodity to meet people’s felt needs. He’s the Creator God who gave himself to redeem us from sin. Knowing that Jesus understands and can sympathize with people may open doors for conversation, but let’s make sure we’re speaking and living the truth so that others can “get Jesus.”

My thoughts on the “HeGetsUs” campaign